END_OF_DOCUMENT_TOKEN_TO_BE_REPLACED

The forthcoming G20 summit comes at an appropriate moment in the evolution of China’s own relationship with the global economy and its governance.

China’s formal entry into the global economy was marked by its admission to the WTO in 2001. For more than a decade after that, with economic growth averaging around 10%, trade expanding to the point where China became the world’s biggest trading nation, and overseas investment growing very rapidly albeit from a very low base, China chose to take a back seat while learning the ropes of its newly acquired status. During this period, China preferred to play a relatively passive role. As a result, it was frequently criticised by the United States for being a free rider: enjoying the benefits of globalisation without contributing to the global public goods that were needed.

END_OF_DOCUMENT_TOKEN_TO_BE_REPLACED

It is difficult to underestimate the significance of the recent transformation in relations between the UK and China. There are many examples in recent years of countries moving towards a closer relationship with China: the distinctiveness – and significance – of the British case lies in the fact that the UK has regarded itself – and been seen as – America’s closest ally ever since the Second World War.

END_OF_DOCUMENT_TOKEN_TO_BE_REPLACED

China is rising as the US declines. Britain can’t ignore this reality.

‘Since 2005 the financial crisis has rendered western growth rates close to zero and made the global economy ever more dependent on China. This is the new reality. To their great credit, Osborne and his party have seized the nettle.’ (Photograph: Lauren Hurley/PA)

Who would have guessed just three years ago that the David Cameron government would be the author of the boldest change in British foreign policy since the second world war? That is exactly what is now unfolding.

The process began this year when the British government announced it would join a Chinese initiative to help fund Asia’s enormous infrastructural needs. The UK became the first non-Asian country to join the Asian Infrastructure Investment Bank (AIIB), after which more than 30 other countries joined, including Germany and France.

The United States opposed the decision because it saw the AIIB as a threat to the International Monetary Fund and the World Bank. Britain has long been the US’s foreign policy shadow, so the decision to join the AIIB was the most significant act of independence since 1944, when John Maynard Keynes argued with America’s Dexter White at Bretton Woods over the new international financial order.

END_OF_DOCUMENT_TOKEN_TO_BE_REPLACED

The recent slowdown has called previous narratives about China’s rise into question for some. How should we view this economic slowdown? What role will the US play? Global Times (GT) London-based correspondent Sun Wei interviewed Martin Jacques (Jacques), a senior fellow at the Department of Politics and International Studies, Cambridge University, and a visiting professor at Tsinghua University, Beijing, about these questions.

GT: Nobel Prize winner Joseph E. Stiglitz claims in an article that the “Chinese century” has begun and that Americans should take China’s new status as the No.1 economy as a wake-up call. Professor Joseph Nye of Harvard University explains in an essay why the “American century” is far from over. Obama said last year the US will lead the world for the next 100 years. What do you think of these debates?

Jacques: The US is still the dominant power in the world in probably every sense. China is only challenging it economically by virtue of having a huge population. China’s rapid transformation is clearly already having profound economic consequences, and beginning to have serious political, cultural, intellectual, moral, ethical, and military consequences as well. That’s in a way what President Xi Jinping‘s government represents. The Chinese dream imagines a different place in the world and a different future for China.

END_OF_DOCUMENT_TOKEN_TO_BE_REPLACED 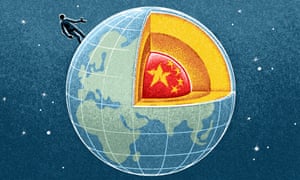