The Making of the Asian Century

This map graphically illustrates how Asia is the demographic centre of the world. And Danny Quah’s accompanying map below demonstrates how the epicentre of the global economy is relentlessly moving from its location in the western Atlantic in 1980 to its present location north of the Red Sea, and to the Indo-Chinese border by 2050. 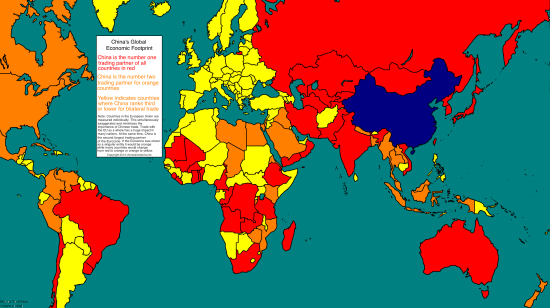 The World’s Largest Economy in 2014

According to the International Comparison Programme of the World Bank, later this year the Chinese economy will become larger than that of the United States measured by purchasing power parity. Already, by the end of 2011 it was 87% of the size of the US economy. The United States has been the world’s largest economy since 1872 when it overtook the UK. The Chinese economy had previously been expected to overtake the US economy in 2019, in other words five years later. Despite the bearish sentiments of many western commentators over the years, the Chinese economy has consistently outperformed the predictions about its rise.

Recent Western commentary on the Chinese economy has been decidedly negative, emphasising the problems and downbeat about the prospects. This, of course, is hardly new: indeed it is absolutely par for the course. In fact, as the figures below show, the Chinese economy has done extraordinarily well in the five years since 2008 and the Western financial crisis. The contrast with the performance of Western economies over the same period is sobering to say the least.

The above figures are taken from the Stockholm International Peace Research Institute’s Military Expenditure Database. For more information, refer to Xiao Tiefeng’s article at the Carnegie-Tsinghua Center for Global Policy, Misconceptions About China’s Growth in Military Spending.