The Belt and Road Initiative marks a new stage in China’s rise. Launched in 2013, it built on China’s going out strategy which took shape around the turn of the century. If the lines of continuity are clear, the differences are even starker. The going out strategy saw China developing closer relations with Southeast Asia, Africa and Latin America, to name the most prominent. In contrast, the BRI is an overarching project designed to transform the Eurasian land mass, presently home to around two-thirds of the world’s population.

We have never seen the like of it before, a project on the grandest of scales and in that sense consonant with China’s own traditions.

Although Europe is part of the Eurasian land mass, the central aim is the transformation of the developing countries that comprise most of the continent. The developmental logic runs roughly as follows. China transformed itself — the most remarkable transformation in human history, one never likely to be repeated — by massive investment, in which the state was instrumental and which was largely directed towards infrastructure.

The result was spectacular economic growth and a massive reduction in poverty. If it worked for China, then why could it not for other developing countries? China doesn’t see itself as a model, but it does believe that these lessons are of more general application.

Spectacular though Belt and Road maybe, it would be wrong to underestimate or dismiss its chances of success. After almost four decades of continuous growth, China has a formidable record of delivery. Belt and Road should not only be taken seriously, it should be assumed that it in the long run it is likely to be largely successful.

By 2050, Eurasia will surely look very different, growth will have taken root in many countries and Eurasia will have moved to the centre of the global economy and geopolitics. For the more sceptical, it should be born in mind that by 2030 the Chinese economy is projected to be twice the size of America’s.

The most important single aspect of China’s relationship has been its dependence on the Middle East for half its oil imports. But the Chinese approach has consistently focused on the need to establish a much broader economic relationship. In this context, the Middle East countries have shown great interest in the Belt and Road Initiative.

All the Middle Eastern states, bar five, are members of the Asian Infrastructure Bank, and three of the 12 directors are from the region.

Apart from the obvious economic importance of China to the Middle East, there are two key reasons why the latter is showing such interest in Belt and Road. Firstly, these countries — and perhaps most notably the Gulf states — occupy a key strategic position with regard to both the land and maritime routes.

This lends their ports an obvious significance and enhances the potential of their accompanying economic zones. The second is that with the decline of fossil fuels now firmly on the agenda, they need to diversify their economies with some alacrity, Saudi Arabia being the most compelling example.

The UAE has been well to the fore in broadening its relationship with China. China is the UAE’s second largest trading partner while the UAE is China’s second largest partner in the Gulf region.

The Khalifa port is one of the fastest growing in the world and, with Cosco’s decision to establish its own container terminal, is set to almost double in size. The Kamsil industrial zone is expanding rapidly with major Chinese investments.

A UAE-China investment fund was established in 2015 and the UAE sees itself as becoming a major financial hub. Lying on the key trading routes to Africa, Europe and the Indian subcontinent, the UAE is well-placed to be a major beneficiary of the BRI.

Another sojourn to China

Original article by Arif Nizami in Pakistan Today can be found here.

The China that I saw last week is a far cry from the country that I had first visited with Prime Minister Zulfiquar Ali Bhutto in May 1976. At the time one of the few hotels in town was the Peking hotel where the Pakistani delegation accompanying the prime minister was put up.

Men and women, both were attired in Mao suits plying mostly on bicycles. There were only a few cars on the roads belonging mostly to communist party officials. The first premier of China, Zhou Enlai had died back in January the same year, while Mao Zedong the chairman and founder of modern China was gravely ill.

Bhutto was the last head of state or government who got an audience with Mao when he was suddenly whisked away from an opera performance in his honour to meet the Great Leader. A few months later Mao died and with that an era ended.

END_OF_DOCUMENT_TOKEN_TO_BE_REPLACED 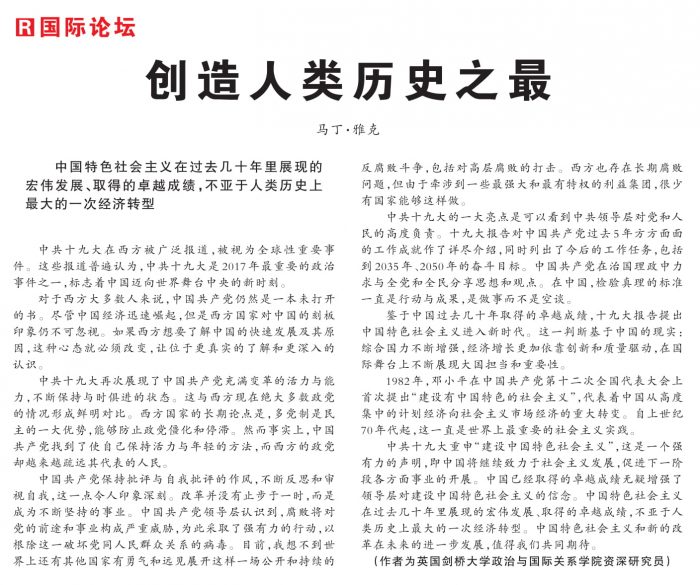