When China and the US Collide: The End of Stability and the Birth of a New Cold War

This article was published in JPI Peace Net and presented to the Jeju Forum for Peace and Prosperity in May 2019, South Korea, in the opening plenary session “Destined for War?: The Future of US-China Relations and its Implications for the Korean Peninsula”. Speakers included Martin Jacques, Prof. Graham Allison and Mr. Li Zhaoxing. The panel was moderated by Prof. Chung-in Moon. 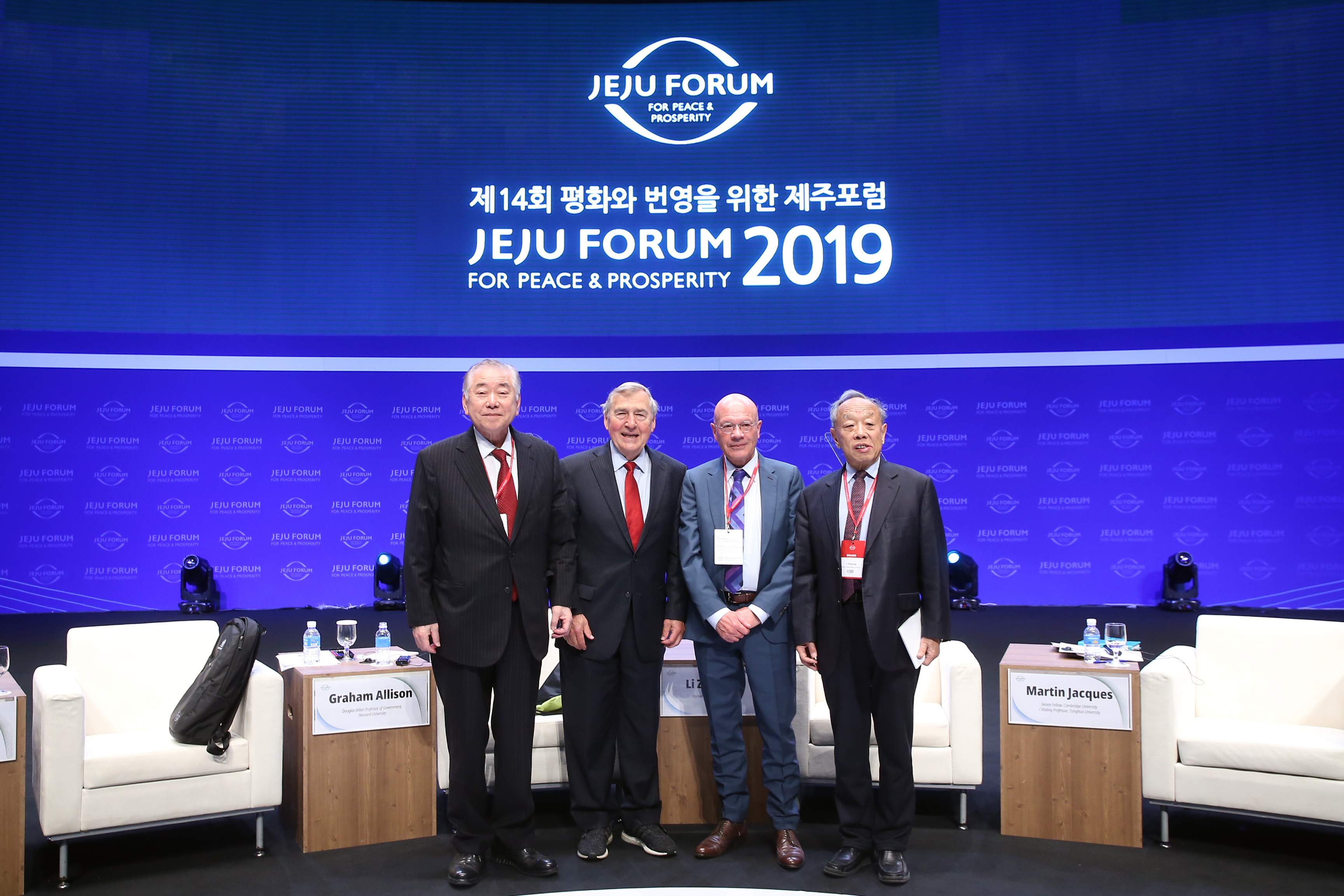 Forty years of relative stability in the US-China relationship are at an end. That stability had depended on two things. First, a huge inequality in the relationship, with the US by far the dominant partner. Second, the long enduring American illusion that the only future for China, if it was to be successful, was to become like America. History has undermined both propositions. Over a period of 40 years, the most remarkable in global economic history, China overtook the US economy and is now 20% larger in terms of GDP purchasing power parity. Furthermore, it is patently clear to everyone that China is never going to be like the US. The US hugely miscalculated, a victim of its own hubris. Its response is a volte face: a desperate search to find ways of reversing China’s rise or at least slowing it down. The US is right that the underlying reason for China’s rise is economic. So it is logical to start with a trade war. But it will not stop at that. It will encompass all aspects of their relationship. We are watching the birth of a new cold war. And the most likely scenario is that it will last a long time, my guess is at least twenty years.

But this will not be a rerun of the last cold war. There are only two similarities: the US is one of the adversaries; and a Communist Party is the governing party in the other. (In truth, though, the Chinese and Soviet Communist Parties have barely anything in common.) Otherwise the circumstances are now entirely different. During the cold war, the US was still a rising power. Now it is a declining power. The Soviet Union failed: China is the antithesis of failure. It has achieved the most remarkable economic rise in human history. China is in the ascendant; the US is an angry and divided country desperately trying to hold on to what it had and the world which it created.

So what is likely to happen in this new cold war? So far it is being fought overwhelmingly on economic terms. This is China’s ground. Apart from its far superior growth rate, which is still three times that of the US, its standout economic achievement over the last decade has been its sharply rising capacity for innovation. The speed with which Alibaba and Tencent have joined the Silicon Valley tech giants in the premier league of technology has been quite remarkable. Huawei is the global leader in telecommunications, most notably 5G: the US doesn’t even have a player in the field. Of course, most Chinese companies lag well behind their American equivalents in terms of productivity, but the direction – and speed – of travel is irresistible. You may remember that even five years ago, the West was still questioning whether China could ever be innovative rather than imitative. No one asks that question anymore. China is a technology superpower in the making. It is this, above all, that has stunned the US. The underlying motive for the attack on Huawei has little to do with security; above all, it is about a fear of China’s competitive challenge. The argument about security is a typical cold war-style diversion.

The US faces a great danger with the trade war. Tariffs, and a growing willingness to cut itself off from the dynamism of the Chinese economy (now the most dynamic in the world), will make the US economy increasingly less competitive: as a result, it will emerge from the trade war and protectionism, whenever that might be, seriously weakened. Both economies, of course, will suffer, but in the long term the US economy will be much the bigger loser.

One of the central characteristics of the last cold war – in which overt economic conflict was very much a secondary factor, with the two economies largely insulated from each other – was military competition between the US and the USSR. This time it will be very different. While military strength remains America’s most coveted form of power, this is not the case for China. The two most important modes of Chinese power, both historically and in the contemporary context, are economic and cultural. For the West, in contrast, they have most typically been military and political. In Chinese thinking, one recalls Sun Tzu, war is something to be avoided rather than embraced. This does not mean that China will not develop a formidable military capacity, but it will not behave in anything like the same fashion as the US (or indeed the Soviet Union). Nor does it mean there will not be war between the US and China, but it makes it rather less likely. The Chinese believe in the very long run; and in the long run they are confident that their economic and cultural power will be decisive. Such thinking engenders patience. All of this tells us that China will be a very different kind of great power to the US.

People have found it very difficult to understand China, a problem that has been compounded by the speed of its rise. We have become habituated to Western ways of thinking and behaving, the legacy of more than two centuries of Western hegemony. China is profoundly different, the product of a very different history and culture. Rather than seeking to understand the difference that is China, we see China through a western prism and expect and require the Chinese to behave accordingly. Entirely unsurprisingly, they don’t. We condemn their lack of western-style democracy. But trends and events increasingly require us to pause for thought. We might not like it, or choose it for ourselves, but Chinese governance has been extraordinarily successful over the last few decades; a global force for good, taking 800 million Chinese out of poverty and saving the world from a cataclysmic depression after the Western financial crisis.

As the world once more enters dangerous waters, in my view our concern should not so much be China but the United States. One of the remarkable things about China is how relatively peaceful it has been during its rise: contrast that with the US in its equivalent period, notably between 1860 and 1914, with the wars of westward expansion against Spain, Mexico, the annexation of Hawaii and the conquest of the Philippines. The same can be said, by the way, of the UK, France and also Japan, all of which fought many wars of expansion during their rise. In contrast, China’s rise has been characterised by an extraordinary restraint, a fact that is largely, if not overwhelmingly, ignored. What concerns me most of all is how America will respond to and deal with its decline. Trump is the first clear expression of and response to this process and it is not encouraging: the authoritarian turn, the erosion of democracy and the separation of powers, the drawing on some of the most regressive aspects of American history, the rejection of diversity at home and plurality in the world. The fact is that imperial countries find decline extremely difficult and painful; my own country, the UK, is a classic illustration. America is almost totally unprepared for its own decline. One must hope that it is not too a harrowing experience either for the US or for the rest of the world.

Which brings me finally to Korea. This has so far shown us, in chronological order, the worst of Trump (‘we will have no choice but to totally destroy North Korea’) and the best (‘the US must pursue a chance to avert nuclear war at all costs’). In a way, Korea is a test case: the longest lasting legacy of the cold war which has so far been impervious to all attempted solutions. After the Singapore summit, which was seemingly beyond almost everyone’s expectations, the Hanoi summit was a great disappointment. Where from now? It is difficult to see progress in the context of a rapidly deteriorating relationship between China and the United States and Trump’s turn towards a cold war. Can the Korean peninsula provide a shaft of light? It seems unlikely; but the Singapore summit, and Trump’s embrace of Kim Jong-un and warm words about North Korea’s economic future, cannot be erased. But the rational part of my brain tells me that pessimism is in order.