Observers around the world will be looking for indications of future policy from Beijing.

With the world’s second-largest economy being a driver of global growth, the first of these will be the GDP target, which will be announced by Premier Li Keqiang when he delivers the Government Work Report on March 5.

Last year he set this within a range of between 6.5 and 7 percent, with the actual outcome being within that at 6.7 percent.

Most analysts expect the target to be set at a similar level, with the government placing strong emphasis this year on economic stability.

With President Xi Jinping committing China to globalization in his speech to the World Economic Forum in Davos, Switzerland, in January, China’s reaching out to the rest of the world through its Belt and Road Initiative is also likely to be center stage. 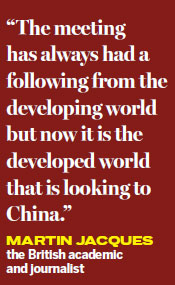 Beijing will host the Belt and Road forum for international cooperation in May, which will be attended by heads of state and government from across the world.

The two sessions meeting – the CPPCC opening on March 3 and the NPC two days later – is also the first since President Xi was confirmed as “core leader” in October as a demonstration of Party unity.

The meeting also has greater political significance this year, since the 19th CPC National Congress also takes place later this year, with the election of a new Standing Committee, China’s top leadership body.

The new leadership will be responsible for driving reforms over the next five years, which is seen as a crucial period for their delivery.

Martin Jacques, the British academic and journalist and author of the best-selling When China Rules The World, believes there will be much greater international interest in the two sessions this year than in previous years.

“China is definitely now playing to a bigger gallery. The meeting has always had a following from the developing world but now it is the developed world that is looking to China,” he says.

“The turning point was President Xi’s speech at Davos saying he was committed to globalization. Never in my lifetime have I witnessed a Chinese leader so listened to in the West. It was a speech where people hung on every word. It came at a time when Trump’s new strategy was to turn away from globalization.”

The meetings begin as the government’s attempts to stabilize the economy appear to be succeeding. China’s Purchasing Managing Index (PMI), an official gauge of manufacturing activity, rose to 51.6 in February from 51.3 in January, according to data released on March 1.

Wang Huiyao, counselor of the China State Council, or China’s Cabinet, who will be attending the meeting believes the GDP growth target will be kept at around 6.5 percent.

“I think they will keep this target for this year at least. There may be some adjustment on this over the next five years.”

Rana Mitter, professor of Chinese history at Oxford University and director of the Oxford University China Centre, says many economists will be looking for indicators that policymakers are prepared to tackle some of the pressures building up in the economy.

“I think the leadership fully understands that if they don’t deal with these soon they will be more painful further along the way,” he says.

“They have to respond to both the increasingly high levels of debt and problems in the financial system, like shadow banking.”

One of the government’s central aims is to double 2010’s GDP per capita income level by 2020 so that China can become a high-income country by the following year which marks the 100th anniversary of the founding of the Communist Party. To do this, the economy needs to grow by 6.5 percent in each of the next three years. Some economists have been skeptical about the narrow window of time left to achieve this.

Wang, however, who is also founder and president of the Center for China and Globalization, an independent think tank, believes there should be enough momentum to meet the goal.

“There could be challenges, but when the Chinese government sets a target, it always tries to achieve it. The new areas of the economy in e-commerce and technology are very strong. The government has placed great emphasis on innovation and reducing regulation on enterprises, which I think will pay dividends.”

The meeting is also likely to look ahead to May’s Belt and Road forum for international cooperation, which will be one of China’s key events of the year.

Jonathan Fenby, leading China commentator and author of Will China Dominate The 21st Century?, says there is increasing interest in the initiative in Europe.

“It was initially seen as something that applied just to Central Asia and Southeast Asia, but with the rail line to Germany, European governments and companies see themselves very much at the end of the road,” he says.

Jacques believes the Belt and Road Initiative reaching to Europe could provide the fillip the European economy now needs.

“It could open up Central and Eastern European countries, in particular, to greater Chinese investment, which could be the economic motor than Europe now badly needs.”

Helen Hai, chief executive officer of the Made in Africa Initiative, a UN organization that advises African governments on industrialization and investment, says the Belt and Road is also important to Africa. The 21st Century Maritime Silk Road, which connects with East Africa, and is the sea-lane link of the initiative, is aimed at boosting trade between Asia and Africa.

“Initiatives such as the Belt and Road Initiative and the Asia Infrastructure Investment Bank are about cooperating in economic development,” he says.

“While Donald Trump is talking about bringing jobs back to the US, President Xi, as he did at Davos, is speaking the language of social inclusion and bringing development to the so-called bottom billion, the people in Africa who can benefit from this.”

Derek Han, chairman of NSBO, an investment bank and China research company with offices in London and Beijing, agrees the initiative takes on a whole new meaning if the US retreats from globalization.

“With the Belt and Road Initiative China is stepping into a vacuum, whereas we have an inward looking United States. China looks as though it has a long-term plan and supports globalization.”

The future of Asian trade blocs may also come under discussion at the meeting now that the United States has pulled out of the Trans Pacific Partnership, which has 11 other members, including Japan and Australia.

China has been expected to breathe new life into the RCEP (Regional Comprehensive Economic Partnership), which was launched at the ASEAN (Association of Southeast Asian Nations) summit in Cambodia in 2012.

Some of the TPP members are keen for China to take the place of the US within their grouping.

“I was talking with the Chilean ambassador the other night, and that is what they are hoping,” says Wang.

“It is a trade deal that has already been negotiated and there is a good opportunity for China to move in.”

Jacques believes the two sessions is likely to generate much more interest from those viewing, outside China.

“They will be looking for what China has to offer the world in the difficult times we are currently living through.”